Uniting the body of Christ to for a time of Repenting, Fasting, and Strategic Warfare Praying, to reclaim earthly territories for the Kingdom of God, one nation at a time.

After running away from my calling to lead what will become one of God’s Ministries, designed by Him to fulfill one of the earth’s greatest need in the new technology age, I finally caved in December 2019.  I attended my graduation to receive my Degree, and my life has changed thereafter.

Everything happened so fast!  I grew in the Spirit some 10 years in 1 month.  God started to speak to me a lot about what was on His heart, what would begin happening, and what would be required of me.  A lot apparently, because while at my graduation, a Prophet prophesied that my family would be leaving the great state of Idaho to the other great State of Georgia, for the sake of this Ministry.  And my husband and I was not happy.

But in less than 2 weeks after, we put an offer in to buy our home in Georgia, and at the time of writing this, we will be closing on our Georgia home TODAY.  We move down next week… all while the country seem to be going into lock-down mode over the Corona Virus dilemma.

Over the weeks following my graduation, God was not only sharing with me what was in His heart, but personally teaching me a lot of strange things, and then I would meet persons who were being taught the very same strange things, I got the sense that God was preparing some people for some kind of an out-of-this-world mission.

Some of the topics I was learning was:

All this in one month.  And I was quite content with receiving these training and teaching until I got to Georgia to begin my Ministry, especially while we would all be confined somewhat in our homes during the Virus crisis.  Until I saw this post on someone’s Facebook timeline. 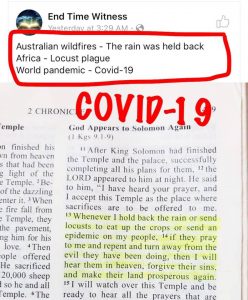 Suddenly, God would not allow me to just read it without disturbing my spirit.  First, I had no idea that any other disaster was happening anywhere else besides the Corona Virus.  I read the report on the top, and then read the scripture highlighted.  That scripture I had read some more than 8 times at is was being heavily circulated on Facebook, that scripture I also quoted many times myself.  But somehow, reading it again, it’s like it opened my eyes.

Something hit me! I began to really look deeply into the words, and I found that God was trying to say something. It’s like I saw a coded message (that shouldn’t even be all that coded).  Is God allowing these disasters to accomplish a bigger plan? YES!!!

EVERYONE including many Christians have literally thrown in the towel and is waiting on our leaders to act on our behalf in this crisis.  But in so doing, we have unknowingly removed the hand of God from acting in the earth.  So… what if God is literally saying “MY PEOPLE who are called by MY NAME should REPENT and INTERCEDE on behalf of their country and seek me.  And I, NOT their leaders, will bring healing to their lands.

God was NOT speaking to the general people in the land, not the unsaved but the saved!!! He said MY PEOPLE CALLED BY MY NAME, Could this be, that God allowed these things to happen to the lands because HIS PEOPLE CALLED BY HIS NAME were not being humbled. nor prayerful, nor seeking Him, and had turned to ways of wickedness? Additionally, could it be, that the healing of the land from these disasters is tied into the condition that HIS PEOPLE CALLED BY HIS NAME is to repent of their sins and become humble before God, and then only then… will He heal their land???

I look around and all I see is the heart of mankind waxed cold.  People no longer have a reverential fear of God.  Evil has taken over and the church of God is either silent or asleep.  I think God wants to send a revival upon the earth… just like He told me he wanted to.

I think God is giving us an opportunity to show the people His power over the earth and its leaders again. At this very moment, in this crisis, we have the attention of every man woman and child in every nation tongue and tribe! This is an opportunity for God to show up through US His children! Because if we as a church do not do this, the Kingdom of Darkness will reign over us like pouring rain and will usher in a dark period upon the earth such as never before.

So God asked me, little old me, at that very moment, to gather an army of believers who were willing to repent and warfare for the territories that are being taken away by the Kingdom of darkness.  He told me that this is not a situation where one or two should be gathered and done in secret, He wanted a spiritual epidemic moving across the earth and causing a ripple tsunami effect.  He wanted the body of Christ to raise up and armor up and stand in front of the nations on the earth for holiness and righteousness and combat the devil and his angels and cause a mighty revival to take over the earth.  He wanted the earth to witness it, so that the people will see the power and the work of our God.

We ask individuals to join this movement.  We ask Ministries to partner with us.  This will cost us nothing but our time, obedience, and devotion to God.  While we are restricted to our homes, the power of prayer crosses all borders and continents to reach its destination.  We can do this from the comfort of our homes!